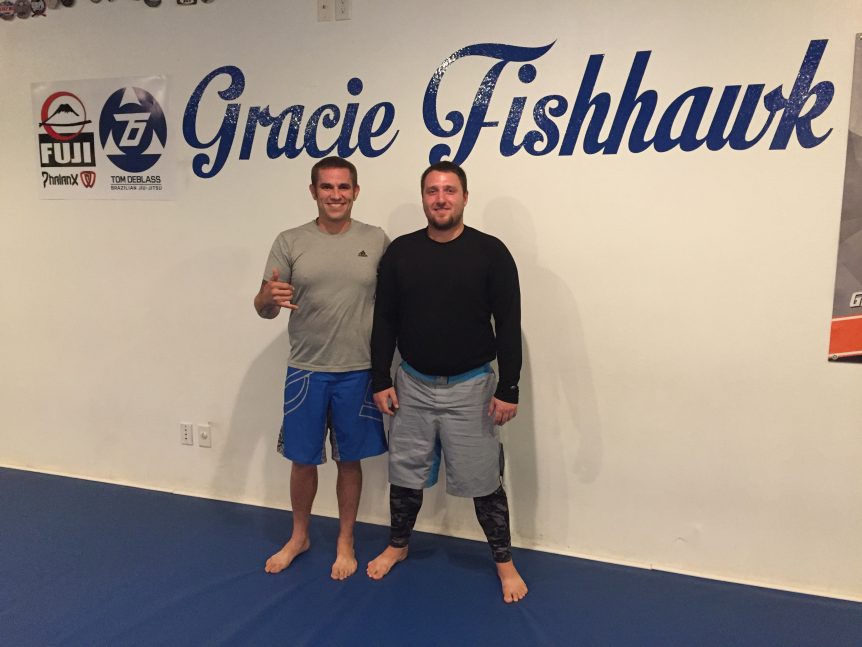 [In Just a Few Short Months, Travis and Todd Pictured] One will often hear the phrase from Brazilian Jiujitsu (BJJ) practitioners that it is a lifestyle rather than just a martial art. While other martial arts are certainly admirable and practicing them can inject someone’s life with purpose, they are often viewed as simply a hobby. Yet, the interpersonal nature of BJJ makes it more truly a lifestyle activity in which the people that you train with become your brothers and sisters on and off the mat. Take Todd Regan for example, his transformation has been remarkable to say the least. Just a few short months ago Todd weighed 260 pounds but now only weighs in at 217 pounds and 200 is his next target.

Todd is a living example of how BJJ can inspire someone to change his or her life in the pursuit of excellence on the mat. Todd, who has known one of the gym owners, Travis Baumgartner, since the 8th grade was decidedly on a downward trajectory in terms of his health and lifestyle. Todd says, “Up until last year I had high blood pressure, had to take high blood pressure medicine and I smoked.” Yet, after his introduction to BJJ through his friend Travis and Steven Ruiz, Todd’s progress has been nothing short of amazing. As he is proud to observe, “I quit smoking and I am off high blood pressure medication” and he credits BJJ with this transformative process.

Furthermore, what Todd has found even more rewarding is the type of people that he is surrounded by in BJJ. The people that he works out with every day are more positive, more health conscious and much more goal driven than the crowd that he used to be surrounded by. He believes BJJ is so remarkable because it is a mental challenge as well as a physical one. This mirrors the common adage about BJJ which is that it is a form of human chess. For Todd, working out with and hanging out with the people that he has met in BJJ has become the highlight of his weekly schedule.

This positive change and newly adopted lifestyle experienced by Todd is what the team at Gracie Fishhawk is so proud to represent to others. While any martial art can benefit an individual, BJJ and specifically Gracie Fishhawk offers both a transformative experience and a lifestyle for the person that needs to improve his or her health, fitness and mental outlook. So in this regard, we at Gracie Fishhawk applaud Todd and his ongoing improvement. We want to let him (and you) know that the gym and all of its members are here every day to support you on your own personal vision-quest for positive change.

Victor ToddThe Transformative Power of BJJ: From Fat to Fit01.18.2017